“The newspapers we looked at for this research tended to give the Conservatives more coverage than the other parties, and I think that had a lot to do with the efficient and effective campaign that the Conservatives ran,” said Lindgren, who is the lead investigator for the Local News Research Project. “It’s also important to note that for the most part, the coverage was either neutral or positive so overall the Tories were getting their message out to readers of these ethnocultural publications in a way that worked well for them.”

Lindgren said the Tories benefited from the effects of incumbency but they also made a point of courting ethnic journalists by giving them special access to interviews and briefings by the prime minister and cabinet ministers. She suggested that smaller news organizations may have been more vulnerable to what she called the Conservative “charm offensive” because limited newsroom budgets made them more reliant on photos and other content supplied by the party. In some cases, party advertising may also have had an effect: The majority of political advertisements in the Canadian Punjabi Post, for instance, were purchased by the Tories, prompting questions about the influence this may have had on coverage decisions. 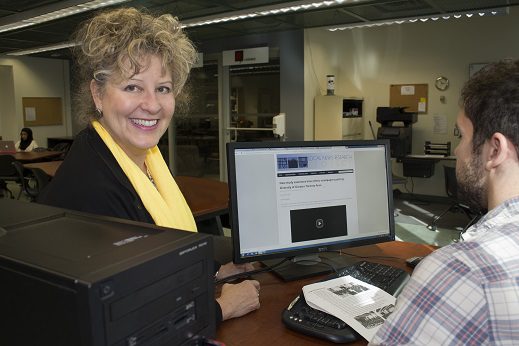 Lindgren’s research, which will be published in the December 2014 issue of the Canadian Journal of Political Science, focused on coverage of the 2011 federal election in five ethnocultural publications in the Greater Toronto Area – the Russian Express, Korea Times Daily, Canadian Punjabi Post, Punjabi Daily and Ming Pao. All are daily publications except for the weekly Russian Express. The study concluded that while there was no overwhelming pattern of stories or photos skewed explicitly in favour of the Conservatives, the party did benefit in that more of its politicians were featured in photographs, it was the sole focus of more stories and photos than its competitors, and it was mentioned first most frequently in news coverage.

“The degree to which a candidate or party can consistently earn first mentions in stories…is a measure of campaign effectiveness in that it means party strategists are choosing the topic and framing the discussion, leaving the competition to react in later paragraphs,” Lindgren observed in the paper, entitled “Toronto-area ethnic newspapers and Canada’s 2011 federal election: An investigation of content, focus and partisanship.”

Lindgren said she was interested in investigating election coverage in the ethnic media because language barriers have limited the amount of research done in this area. During the 2011 election, the Conservative Party, in particular, also launched a media strategy that targeted ethnic communities, because a “growing number of ridings in and around major Canadian cities were home to concentrations of potential supporters from single ethnic groups,” Lindgren wrote.

Most Canadian voters do not participate directly in political events and therefore depend on the news media to help them make informed decisions, Lindgren noted. In addition to examining whether the Conservative party’s courtship of ethnic media paid off in terms of coverage, the research also examined how much election-related news the ethnocultural publications carried, the subject matter dealt with in the coverage and the geographic focus of the reporting (local campaigns versus national campaigns).

The results showed that interest in the election varied by publication. The Punjabi Daily carried the most election-related coverage – a total of 123 stories and photos, or 32 per cent of all news items the paper published during the study period. The Russian Express, on the other hand, published just 19 election-related stories and photos, which made up a mere 5.9 per cent of their total news items. The study also observed that both the Punjabi Daily and the Punjabi Post were more similar to mainstream news coverage in that both publications ran more stories about election strategy and poll results than issue-related articles.

In almost all cases the ethnic papers filled in gaps left by mainstream media by providing more extensive coverage of the local races of interest to their readers. Compared to the Toronto Star, for instance, the Punjabi papers published much more extensive coverage of the ridings of Brampton-Springdale and Brampton-Gore-Malton, where all three main federal parties ran candidates of Punjabi background.

Since 2011, other parties have followed the Conservative lead in terms of targeting ethnic media. British Columbia’s Liberal party, for instance, established an ethnic outreach strategy in the spring of 2013. Among other initiatives, the strategy called for hiring more people with language skills to deal with media requests and establishing a group of supporters to champion the Liberals in non-English media by writing letters to newspaper editors and calling in to open-line shows.

This story was first published by the Ryerson Journalism Research Centre
http://ryersonjournalism.ca/2014/09/19/conservatives-received-most-coverage-in-ethnic-gta-newspapers-research-finds/